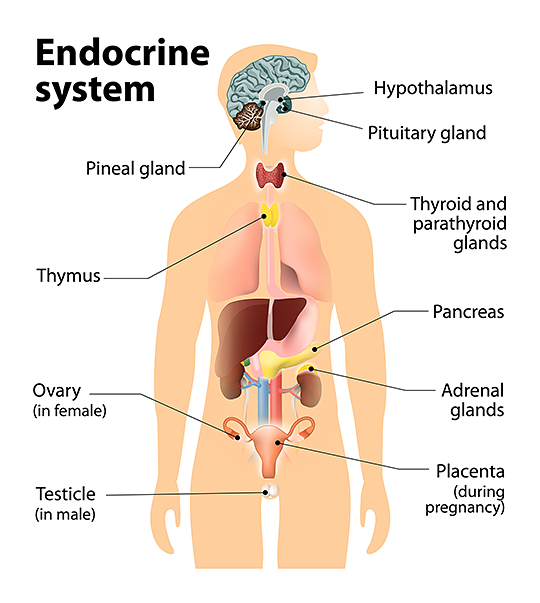 The endocrine system is a chemical messenger system comprising feedback loops of the hormones released by internal glands of an organism directly into the circulatory system, regulating distant target organs. In humans, the major endocrine glands are the thyroid gland and the adrenal glands. In vertebrates, the hypothalamus is the neural control center for all endocrine systems. The study of the endocrine system and its disorders is known as endocrinology. Endocrinology is a branch of internal medicine.

A number of glands that signal each other in sequence are usually referred to as an axis, such as the hypothalamic-pituitary-adrenal axis. In addition to the specialized endocrine organs mentioned above, many other organs that are part of other body systems have secondary endocrine functions, including bone, kidneys, liver, heart and gonads. For example, the kidney secretes the endocrine hormone erythropoietin. Hormones can be amino acid complexes, steroids, eicosanoids, leukotrienes, or prostaglandins.

The endocrine system can be contrasted to both exocrine glands, which secrete hormones to the outside of the body, and paracrine signalling between cells over a relatively short distance. Endocrine glands have no ducts, are vascular, and commonly have intracellular vacuoles or granules that store their hormones. In contrast, exocrine glands, such as salivary glands, sweat glands, and glands within the gastrointestinal tract, tend to be much less vascular and have ducts or a hollow lumen.