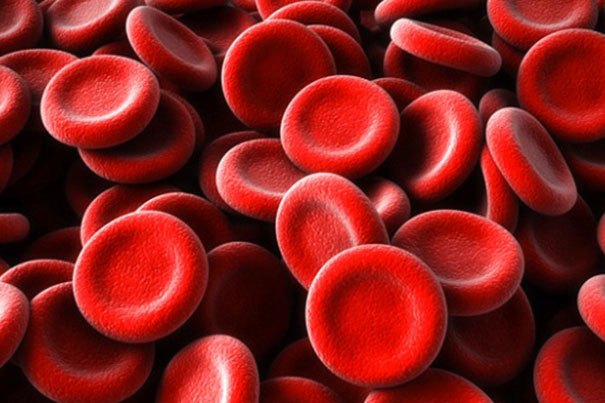 Hemoglobin (American English) or haemoglobin (British English) (/ˈhiːməˌɡloʊbɪn, ˈhɛ-, -moʊ-/), abbreviated Hb or Hgb, is the iron-containing oxygen-transport metalloprotein in the red blood cells (erythrocytes) of almost all vertebrates (the exception being the fish family Channichthyidae) as well as the tissues of some invertebrates. Hemoglobin in blood carries oxygen from the lungs or gills to the rest of the body (i.e. the tissues). There it releases the oxygen to permit aerobic respiration to provide energy to power the functions of the organism in the process called metabolism. A healthy individual has 12 to 20 grams of hemoglobin in every 100 ml of blood.

In mammals, the protein makes up about 96% of the red blood cells' dry content (by weight), and around 35% of the total content (including water).Hemoglobin has an oxygen-binding capacity of 1.34 mL O2 per gram,which increases the total blood oxygen capacity seventy-fold compared to dissolved oxygen in blood. The mammalian hemoglobin molecule can bind (carry) up to four oxygen molecules.Hemoglobin is involved in the transport of other gases: It carries some of the body's respiratory carbon dioxide (about 20–25% of the total) as carbaminohemoglobin, in which CO2 is bound to the heme protein. The molecule also carries the important regulatory molecule nitric oxide bound to a globin protein thiol group, releasing it at the same time as oxygen.

Hemoglobin is also found outside red blood cells and their progenitor lines. Other cells that contain hemoglobin include the A9 dopaminergic neurons in the substantia nigra, macrophages, alveolar cells, lungs, retinal pigment epithelium, hepatocytes, mesangial cells in the kidney, endometrial cells, cervical cells and vaginal epithelial cells.In these tissues, hemoglobin has a non-oxygen-carrying function as an antioxidant and a regulator of iron metabolism.Excessive glucose in one's blood can attach to hemoglobin and raise the level of hemoglobin A1c.