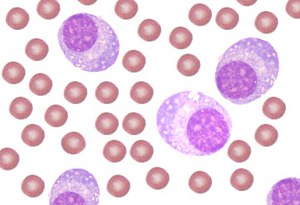 Plasma cells, also called plasma B cells, are white blood cells that originate in the bone marrow and secrete large quantities of proteins called antibodies in response to being presented specific substances called antigens. These antibodies are transported from the plasma cells by the blood plasma and the lymphatic system to the site of the target antigen (foreign substance), where they initiate its neutralization or destruction. B cells differentiate into plasma cells that produce antibody molecules closely modeled after the receptors of the precursor B cell.

Plasma cells are large lymphocytes with abundant cytoplasm and a characteristic appearance on light microscopy. They have basophilic cytoplasm and an eccentric nucleus with heterochromatin in a characteristic cartwheel or clock face arrangement. Their cytoplasm also contains a pale zone that on electron microscopy contains an extensive Golgi apparatus and centrioles (EM picture). Abundant rough endoplasmic reticulum combined with a well-developed Golgi apparatus makes plasma cells well-suited for secreting immunoglobulins.Other organelles in a plasma cell include ribosomes, lysosomes, mitochondria, and the plasma membrane