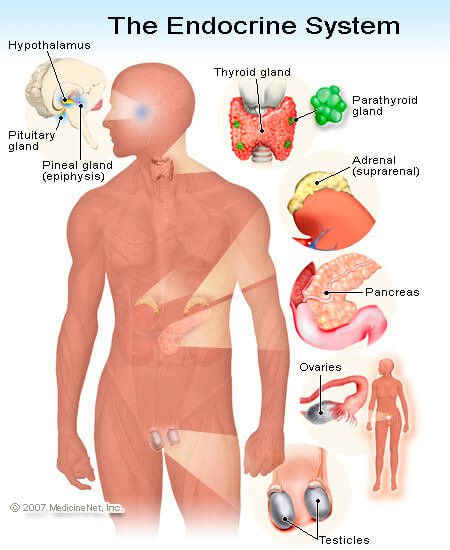 The thyroid, or thyroid gland, is an endocrine gland in the neck consisting of two connected lobes. The lower two thirds of the lobes are connected by a thin band of tissue called the thyroid isthmus. The thyroid is located at the front of the neck, below the Adam's apple. Microscopically, the functional unit of the thyroid gland is the spherical thyroid follicle, lined with follicular cells (thyrocytes), and occasional parafollicular cells that surround a lumen containing colloid. The thyroid gland secretes three hormones: the two thyroid hormones – triiodothyronine ( T3), and thyroxine (T4), and a peptide hormone, calcitonin. The thyroid hormones influence the metabolic rate and protein synthesis, and in children, growth and development. Calcitonin plays a role in calcium homeostasis.Secretion of the two thyroid hormones is regulated by thyroid-stimulating hormone (TSH), which is secreted from the anterior pituitary gland. TSH is regulated by thyrotropin-releasing hormone (TRH), which is produced by the hypothalamus.

The thyroid gland develops in the floor of the pharynx at the base of the tongue at 3-4 weeks gestation; it then descends in front of the pharyngeal gut, and ultimately over the next few weeks, it migrates to the base of the neck. During migration, the thyroid remains connected to the tongue by a narrow canal, the thyroglossal duct. At the end of the fifth week the thyroglossal duct degenerates, and over the following two weeks the detached thyroid migrates to its final position.